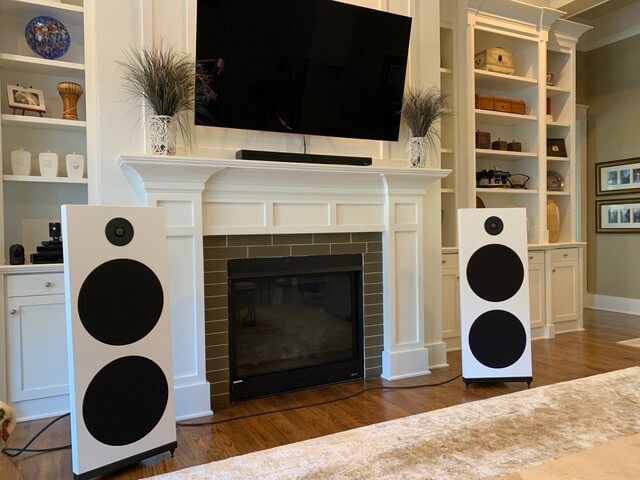 I just had the opportunity to audition the Spatial Audio M3 Sapphires at the Spatial Audio Lab production facility in Salt Lake City, Utah. Owner and designer Clayton Shaw spent a generous two hours with me as we listened to the speakers and talked about all things audio. It was quickly obvious that Clayton is very passionate about his work, and has dedicated over 30 years to perfecting his open baffle speaker designs.
‍

I was a bit reluctant to go there, because I felt I already had my personal end-game speaker with my Harbeth Super HL5 Plus setup. But as I read all the positive reviews on the Sapphires and the descriptions of how they sound, I couldn’t resist (Hey, what audiophile EVER has their end-game setup?). Going in, I felt Harbeths would be pretty tough competition for the Sapphires, and that the Sapphires would be hard pressed to out-perform them. The Harbeths also cost a couple thousand dollars more, so they should sound better, right? So here are my impressions:
‍

The thing that jumped out immediately was the holographic imaging and full, natural tonal qualities of the sound. My top three priorities for hifi are soundstage/imaging, tone/timbre, and detail. The Sapphires delivered these in spades. The imaging actually startled me. It was so palpable and three-dimensional. I can honestly say, it was the most realistic and holographic imaging I have heard.
‍

The same can be said for the tonal qualities. The tone of the instruments and vocals was rich and natural. There was no bloat or coloration. In fact, the M100 midrange/tweeter is as neutral as anything I’ve heard. It is also very quick and resolving. The mids were full-bodied and very natural sounding. The high frequencies were much the same. There was zero hardness or harshness, but all the detail was still there.
‍

The sound of the Sapphires is very different from that of my Harbeths. The HL5s are an exquisite speaker with extraordinary detail, dynamics, and tone. In comparison with the Sapphires, I have to say that the Harbeths sound much leaner and thinner. The Sapphires put much more meat on the bones and sound more realistic and true to life. The highs on the Harbeths are also harder and brighter, which can often leave me with listener fatigue if I’m not careful. I didn’t hear any of that stridence in the Sapphires – even on a particular track that typically grates on my ears with other speakers.
‍

I might also add at this point that my hifi journey has included ownership of Klipschorns, Tektons, and Magnepans (1.7is, which I still have). So I have some fairly robust company to compare them to. I’ve also been to RMAF several times, so I’ve heard a lot of different speakers. Up to this point, the Harbeths have emerged as the best of the bunch for my personal tastes and budget. But that may well be changing. And that brings me to the bass. The bass from the Sapphires may be their strongest attribute. It is full, rich, detailed, and textured. This open baffle bass is quite unlike any bass I’ve heard – in a very good way. I’ve been using a pair of subs with the Tektons, Magnepans, and the Harbeths. From what I heard from the Sapphires, I’m pretty sure there would be no need for a sub. Subs would likely only distract from the sound quality.
‍

In trying to summarize my listening experience, the thought that keeps coming to my head is that the Sapphires took things to an entirely new level in terms of sound quality. Everything, from low frequency to high, from tone and timbre to imaging and soundstage, everything about the Sapphires just felt like it was on a higher plane that what I have been used to. Listening to them was a completely immersive and impressive experience. I can now understand why they’re getting such rave reviews.
‍

I mulled things over for one day, then called Clayton and ordered a pair of M3s. It will be interesting to compare the Sapphires and the Harbeths head-to-head in my own listening room, and I plan to report back on how that goes. But I wouldn’t have ordered the Sapphires if I didn’t think they were clearly superior to what I already have. I’ve concluded that the hype and buzz surrounding the Sapphires are very well deserved.